A study of Camden

"We are starting from where we are," David Arditti said recently, "which is a highly fragmentary (indeed, almost non-existent) dedicated cycle network, and an established culture of vehicular cycling. We need to develop the dedicated network, and interface with the established norms of London cycling as well."

I think that's an excellent summary of where we are starting from. And I also think that people are generally agreed where we would like to end up, as well. The thing still to be decided, it seems to me, is the best way to get there.

There are basically just two options here: bottom-up or top-down. The bottom-up approach is "strictly pragmatic and ad hoc", and whilst it might suit the British psyche very well to go down this road, there is a way to "go much further" than this, relatively quickly, and for relatively not much money.

David also writes: "What I'd like to see next, apart from the northwards extension of the Royal College Street tracks to connect with Kentish Town Road, is for the connection of this route westwards through to Primrose Hill and Hampstead to be tackled." 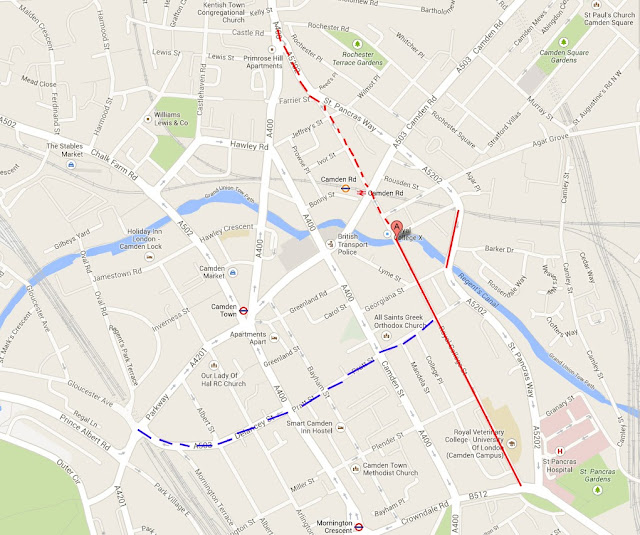 He continues: "This currently goes westbound via Pratt Street, which has reasonable conditions [...] and then via the appalling Delancey Street [...] The solution to all this is clearly to replicate something like the Royal College Street design on Delancey Street [...] Delancey Street could be [...] reduced to one consistent lane, westbound only for motor traffic, with cycle tracks going in both directions."
The route via Delancey Street used to be part of LCN36, which itself went from Kempton Park to Tottenham via Shepherd's Bush (a distance of some 20 miles as the crow flies). For those of my readers who are unfamiliar with the layout of London, the general direction of travel here is at about twenty-to-two.

How would this route fit into a revitalised London Cycling Network?

In the map above, the routes in Camden Town itself have been omitted, for reasons which will become apparent in due course.

The next map is much more interesting, I think. It shows the current functionality of the 'strategic' routes. Let's take a closer look at some of the non-functioning parts, beginning with the routes through Regent's Park.

There are only a few places where a north-south route can get into and out of Regent's Park. There is a route via Marylebone High Street, another one via Harley Street, and lastly, one via Portland Place. I prefer the Harley Street option, though it may be that installing a crossing over the Marylebone Road proves to be problematic.
The idea hereafter is to connect up with the northern section of the Broad Walk, which has been functioning as a shared-use path since August 2008. There are two ways that this can be done.

This means to say, there has to be a good reason why considerate cycling is not allowed on paths like the one shown in the photos above. To be honest with you, I am not entirely sure I know what that reason is.

There is a route through Primrose Hill Park which is likewise barred to considerate cycling, but I can't find any decent photographs of this route, so I am going to move on.

This route is coded as O10, and it goes from Kingsbury and beyond to East Ham and beyond. It incorporates some of LCN49, some of LCN8 and some of LCN16. The section between the two highlighted bits has never been part of the LCN.

In terms of engineering, one would hope that this route could easily be made to function. Install a drop kerb here? Remove some gates there?

In this day and age, however, it seems to me unlikely that it would ever happen this way; but I wonder if we could at least consider it.

Sir Robert Watson-Watt, a pioneer of Britain's early-warning radar, was a great proponent of the 'cult of the imperfect'.

"Give them the third best to go on with," he said. "The second best comes too late; the best never comes."

This 'war-time' mentality was discussed by Robert Peston a little while back. "There's an alternative explanation for why Whitehall is so poor at promoting and organising the economically important modernisation of British infrastructure," he noted, "which is that ministerial and official thinking is often not rigorous enough, and individual ministers and civil servants are often too scared to take personal responsibility for their actions. True risk taking of the war-time sort, some would say, is about analysing risks with great care but to a tight timetable. It's not about ignoring risks."


There is a route which I have coded as G2a. It is loosely based on some LCN routes, but rather frustratingly, I can't identify which ones.

I want to look at the highlighted section of this route, going from left to right.

We start with a view of Fitzroy Square. You can just about make out a bicycle logo on the carriageway.

Another route which functions in one direction only is a sort of by-pass to the north of Camden Town.

As before, I want to look at the highlighted section, going from left to right.


The value of developing this route further reveals itself by considering the map to the left. As you can see, it would connect well with the Royal College Street route and provide a good link up towards Belsize Park and Hampstead. It is also slightly more direct than a route which goes via Delancey Street.


Yes, it would, but so also would a two-way cycle route that goes via Parkway ...

The map above shows all of the proposed 'strategic' routes in Camden Town centre. It would be wonderful to think that one day bicycle traffic could use all of these routes in both directions, but realistically, the prospect of this happening in the short-term is not far off nil.

Still, just because the authorities are not able to do everything all in one go is not a very good reason for them to do nothing.

The routes themselves could still function, it's just that in some places, the course of each route might not be the same in both directions.

To those who say: Ah! Yes! Now then! But this way forward is, like, what? the third best option?

Okay, but if people think this is a problem, then they should refute away! (Evidence only, please, no anecdotes).

In the case of this orange-coloured route, I cannot see a good way to avoid the need to develop a high-engineered solution at the highlighted section.


The level at which this bit needs to function is high.

As a general rule of thumb, however, the level at which most of the network would function—certainly during this "introductory" phase—would probably be quite low.


Subjective feelings of safety are of course important, but the concern must surely be that any improvements to the cycling environment do not induce a false sense of security. In the case of some routes, the practical difficulties that would come with the construction of high quality two-way cycle routes would be many and complicated. This is particularly true with regard to the way that junctions would need to be treated.

In Camden, there is a very complex one-way system, and until people know exactly what's what, it may very well prove to be the case that the minimum change has the most benefit, in the short-term at least.


On the one hand, as the Mayor's Cycling Commissioner has noted: "Changes to something as complicated as the road network have to be thought through; they cannot happen overnight."

On the other hand, an expression which is often used when describing the development of our cycling environment is "glacial".

We need to strike the right sort of balance here, and not allow ourselves to become paralysed by some "impossible purity of vision".

All of the functioning parts of the proposed network "can be introduced on the basis of an overall plan (preliminary plan)."

The map below shows all of the non-functioning parts (both 'local' and 'strategic').

Delancey Street and Royal College Street are not shown on this map because the routes of which they form a part are, in fact, functional.

Cycling: the way ahead observes: "The best guarantees for finding intelligent solutions, which must very often be adapted to the specific situation in hand, include taking into account the experience of people who cycle on a daily basis and the imagination and subtlety of analysis of those in charge of the projects. Only by studying a cycle route network, however, will it be possible to truly grasp the situation, to draw up a list of black spots and to act in a targeted and highly efficient fashion."

If money is going to be spent improving certain parts of the network, then of course, this money should be spent well, with good attention to detail. But if the circumstances are such—as they seem to be at the moment—that it is not possible to reconfigure the entire network to better meet the needs of people on bicycles—all in one go, that is, and consistent with the philosophy of Sustainable Safety—then what? do nothing instead? No, I don't think so. To what purpose?