A closer look at Cobden Junction

Further to my earlier blog, I have come to the very firm conclusion that it is not possible to consider the redevelopment of Cobden Junction without also considering how other (nearby) junctions would be made to work.

In my view, the following junctions need to be looked at as part of the planned programme of works:

Regarding the development of a strategic cycle network, it would be jolly useful if cyclists were able to travel in both directions along an east-west cycle route that goes via Mornington Crescent and Crowndale Road. (I'll explain why at the end.) Accepting this for the moment, it obviously goes without saying that in order to be able to facilitate this, the value in "removing" all unnecessary vehicle movements from around Cobden Junction would be significant.


Mornington Crescent at the junction with Camden High Street

A not unreasonable question to ask, therefore, is: Would it be possible to close off Mornington Crescent (at the junction with Camden High Street) to all motor traffic?

I don't know what the answer would be. However, if Mornington Crescent (at the junction with Hampstead Road) was to be reconfigured, I think that, at the very least, it would be possible to make the northern section one-way (eastbound).


Mornington Crescent at the junction with Hampstead Road


The southern and northern entrances to Mornington Crescent

This would relieve some of the pressure around Cobden Junction, which, regardless of everything else, can only be viewed as being a good thing, surely.


The point to be proved here is that by enabling vehicular traffic to enter Mornington Crescent from Harrington Square, there is simply no need for the northern entrance to accommodate two-way vehicular traffic flows.


We can see from the maps above that this is indeed the case.


Accordingly, the width of the roadway could be reduced considerably, without unduly affecting the movements of vehicular traffic, but with the added benefit of generating space (which could be used for other things).

And now I am going to completely embarrass myself.


If a picture is worth a thousand words, then what are a couple of maps worth? Please let it be a lot, because I don't feel able to add anything more to what I have already said. 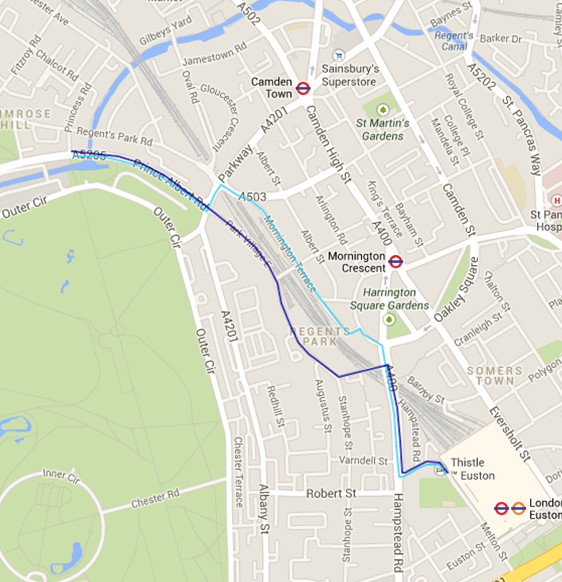 Except to point out, there is a nice little rat-run still available, and who's to say whether it should be cycle campaigners or taxi-drivers who determine whether or not it should get blocked off?
So anyway, I want to move on now, and look at the junction of Bayham Street and Crowndale Road. Before I do that, however, I want to spend a moment considering how these two thoroughfares fit into the general scheme of things. 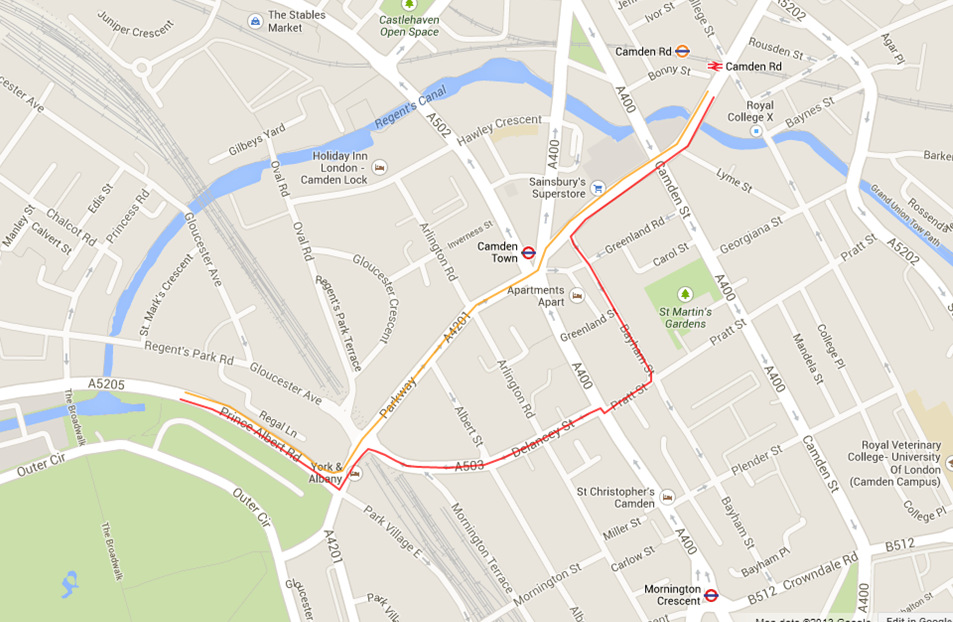 Most of the vehicular traffic entering Bayham Street from the northern end is, in fact, westbound. (Southbound traffic uses Camden Street.)


In the photo above left, the traffic is approaching the junction with Pratt Street. As the next photo shows, the traffic turns right here, towards Primrose Hill and Kilburn. Some of the traffic continues straight on, towards King's Cross (map below). 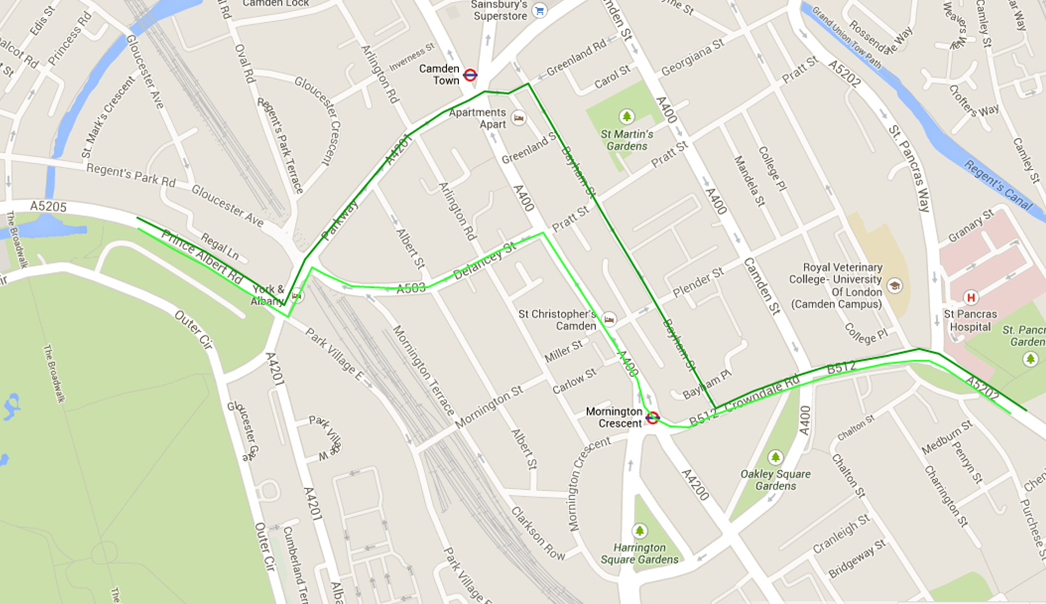 To repeat a point I made in my earlier blog, the bulk of the private motor-traffic which uses the one-way section of Crowndale Road heads north up Camden High Street. 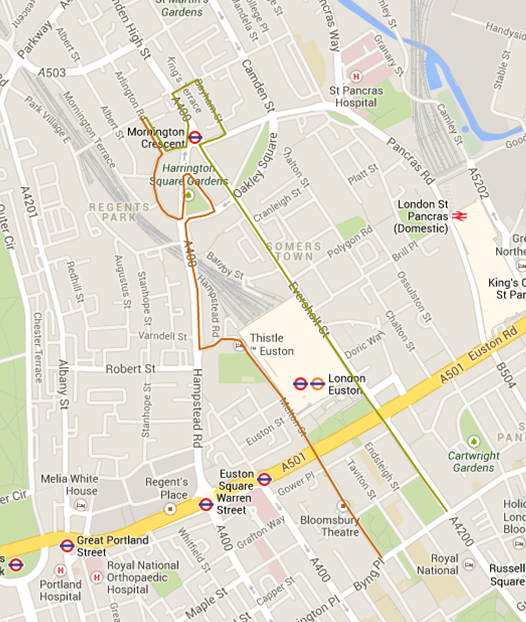 Indeed, of all the various journeys I have looked at, the only one in which private motor-traffic would use the one-way section of Crowndale Road as part of a southbound journey is the one identified in the map to the left.


In the above animation, all of the traffic which uses the one-way section of Crowndale Road heads north up Camden High Street. (This is even true for that traffic which had entered the one-way from Bayham Street.) Okay, this is just a 'snapshot', but even so, it shows very much what was predicted.

Now, TfL claim that the development of a west to east cycle route from Mornington Crescent / Hampstead Road to Crowndale Road would lead to "unacceptable delays to buses and general traffic." I am saying that basically, I don't believe it.

Before closing, I promised I would explain why the development of an east-west cycle route that went via Mornington Crescent would be jolly useful.

Now I need to be careful not to contradict myself here, because I have said in the past that the important thing - at this particular stage - is that the route itself is functional in both directions, even if this requires that the course of each route is not the same in both directions.

The problem is that from Mornington Crescent, there is no way for cyclists to head west to east (other than to do what cars do).

Actually that is not true. If various issues were sorted out - as identified by Mixhael - it would be possible for cyclists to head east via Miller Street (orange route above).

It might be that, in order to get the cycling network up and running, this option would need to be pursued, all the more so if TfL remain of the view that enabling two-way cycling along the red-coloured route would result in buses being delayed by up to ten minutes.

We often hear that people are put off from cycling because of concerns about safety, and how that more people would be attracted to use a bicycle if this was sorted out. But as demonstrated from the experiences of such places as Bracknell, Livingston, Milton Keynes and Stevenage, there is clearly more to it than this.

For many people - probably most - the health benefits of cycling are enormous. In thoroughly congested and reasonably flat cities like London, the speed and convenience that comes with using a bike must also be a significant factor. The case is, for journeys up to about five miles, the bicycle is quicker than pretty much all other forms of transport (door-to-door).

In New York, on 8th and 9th Avenues, it has been shown that locally-based businesses have seen as much as a 49% increase in retail sales directly as a result of investment in active travel. I mention this because on Crowndale Road - which, because of all the one-ways, is not easy to get to by bike - of the 22 shops on the western side of the road, half of them are closed or have their shutters down (as revealed by Street View).

That's one of the many things the TfL computer knows absolutely nothing about.
Posted by bikemapper at 07:50