"Camden Council and Transport for London are committed to providing high quality cycling facilities in Camden Town. As part of the design work a west to east cycle route from Mornington Crescent / Hampstead Road to Crowndale Road was explored. It was found this would require additional traffic signals and for all traffic to be stopped for a short period to allow cyclists to progress safely through the junction. The traffic impact of these changes was assessed and led to unacceptable delays to buses and general traffic." 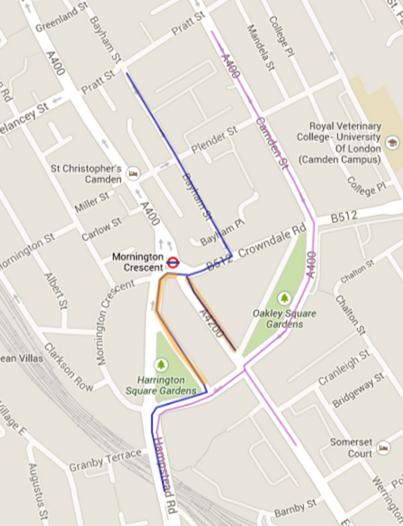 Two views of Eversholt Street, on the left looking south, and on the right looking north

What is the current situation?

According to Camden Cycling Campaign:

"Camden's planners approached CCC earlier this year with proposals similar in many ways to that shown in the consultation, but with a carefully-designed option for an eastbound cycle contraflow along Crowndale Road between Camden High Street and Bayham Street. The option involved the removal of one of the westbound general traffic lanes in Crowndale Road. It included a scheme for access to cyclists from Mornington Crescent and Hampstead Road via a special signal controlled right turn and a scheme for safely crossing the junction with Bayham Street.


Two views of Crowndale Road, both looking west, the one on the left at the junction
with Bayham Street, the one at the right near the approach to Cobden Junction

"On Camden's calculations, the option [of removing one of the lanes on Crowndale Road] would be helpful to pedestrians but would produce some delay for buses at peak times (2-3 mins), which they thought acceptable. But it had to be submitted to TfL's Network Management Group (NMG), who came back with modelling results showing unacceptable delays (up to 10 minutes) to buses on Bayham Street.

"Camden's planners were almost as disappointed by this as we were. But they did not feel able to argue with TfL that bus passengers ought to be subjected to delays of up to 10 minutes. CCC also found it difficult to produce convincing arguments for retaining the cycle contraflow in view of the above. Bus frequencies in this part of Camden are high, but the buses are generally fairly full. The 'traffic evaporation' argument clearly can't be applied as easily to buses as it can to private cars."

It is reported in the consultation document that the new design is expected to have an "acceptable impact on traffic with only slightly longer queues than now".
However, install some additional traffic signals around a junction (photo above), and put a small (a little less than 0.05 miles) section of Crowndale Road on a diet, and, as we are told, this may result in delays of up to ten minutes. Can the Mayor's Cycling Commissioner be asked to verify this?

On the Camden Cycling Campaign discussion page, John Chamberlain makes the point that the cyclists' right turn into Mornington Crescent could be useful, and then asks: "But where would these cyclists have come from?"

This question is easily answered: either from Crowndale Road or Eversholt Street. The other question - how would cyclists get back again? - has been "explored", but if it was followed through, it would apparently lead to "unacceptable delays to buses and general traffic".


We can see above how private motor traffic is currently able to travel to and fro along these routes. Please note that, with the existing configuration, the Mornington Crescent Junction itself is kept free of these very local car movements. However, as far as I can tell from the new proposals, it looks like this is set to change. Seemingly, a slight short-cut is planned to be introduced for certain of these car journeys, as shown below.


If that wasn't tempting enough, it also looks like a right-turn out of Mornington Crescent is to be allowed. Motorists heading south along Hampstead Road will therefore be able to save themselves a minute or so thanks to this development.


On the left is the current arrangement, and on the right, the proposed new layout.

What do cyclists actually need from this development? 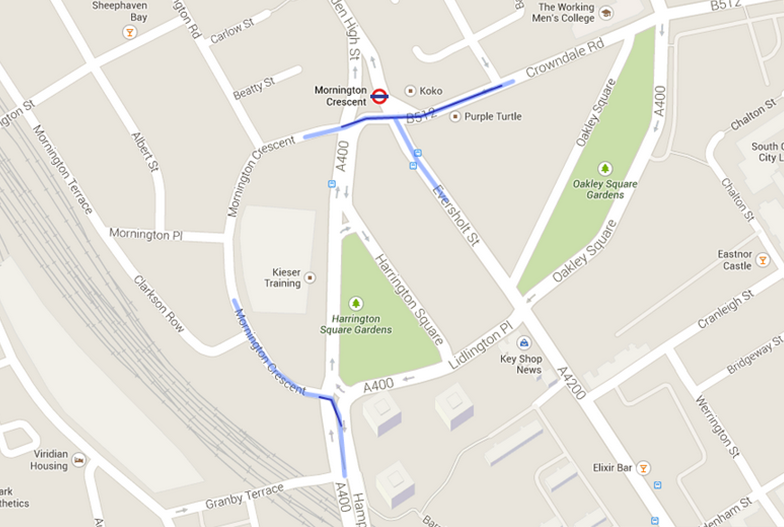 Camden Cycling Campaign say that, given the modelling results from TfL's Network Management Group, "the only position left for us was to argue for investment in east-west cycle infrastructure on nearby alignments. Camden are actively considering a scheme providing a protected cycle crossing of Hampstead Road from Mornington Crescent (south end) to Harrington Square and an eastbound cycle contraflow all along Lidlington Place, providing a link from the junction of Mornington Crescent and Hampstead Road to Crowndale Road near Camden Street." 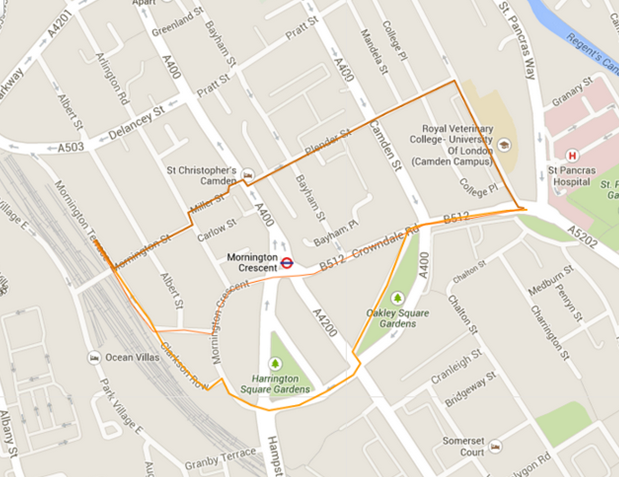 There is also a suggestion from Nicola Lawler to develop a route which goes via Plender Street and Miller Street. Camden are also considering the installation of a contraflow cycle lane on Delancey Street and Pratt Street, with a view to providing a two-way link from Arlington Road to Royal College Street.
In order to develop an amenable cycling environment, it is necessary that the routes which make up the network are meaningful and direct. If the routes are not meaningful and direct, there is a very good chance they will not get used.


Two views of Lidlington Place, the first one looking west, and the second one looking east

The other thing to bear in mind here is that the alternative east-west routes have problems of their own. With regard to the first option, Jean Dollimore writes that the idea is to allow cyclists "to access both Eversholt Street and Crowndale Road via Oakley Square."

The case is, the funds are available to develop an east-west cycle route in this part of Camden now, the work is being planned now, the public are being consulted now. If Camden Council and Transport for London are committed to providing high quality cycling facilities in Camden Town, as they claim, then how can they have allowed themselves to be thrown off track by the first nutshell to have fallen on the rails?

Cycling: the way ahead writes: "Several surveys have specifically measured the acceptability of measures put forward to reduce car use. Politicians and technicians are more timorous than any other group of persons questioned, including motorists, perhaps because they confuse their own mobility requirements with those of the average citizen. But the public is in fact ready for a change of attitude from the authorities, and it is the latter who are lagging behind public opinion."

For all anybody knows to the contrary, transport-modelling computer programmes operated by Network Assurance organisations may be the most timorous of them all. Either way, it seems somehow dystopian that a machine should be the one to decide whether or not bicycle facilities should be installed in such-and-such a place. The machine is not in any way accountable to the public, after all.

Let us recall that the TfL data is wildly different to the Camden data. There has to be some explanation for this huge discrepancy. I would feel much happier about this if I knew that Andrew Gilligan had been shown the evidence.