The Bristol Cycle Strategy says on page 9: "The desired cycle network in Bristol is large and intertwined and can appear quite confusing on a single page, particularly for those unfamiliar with Bristol." 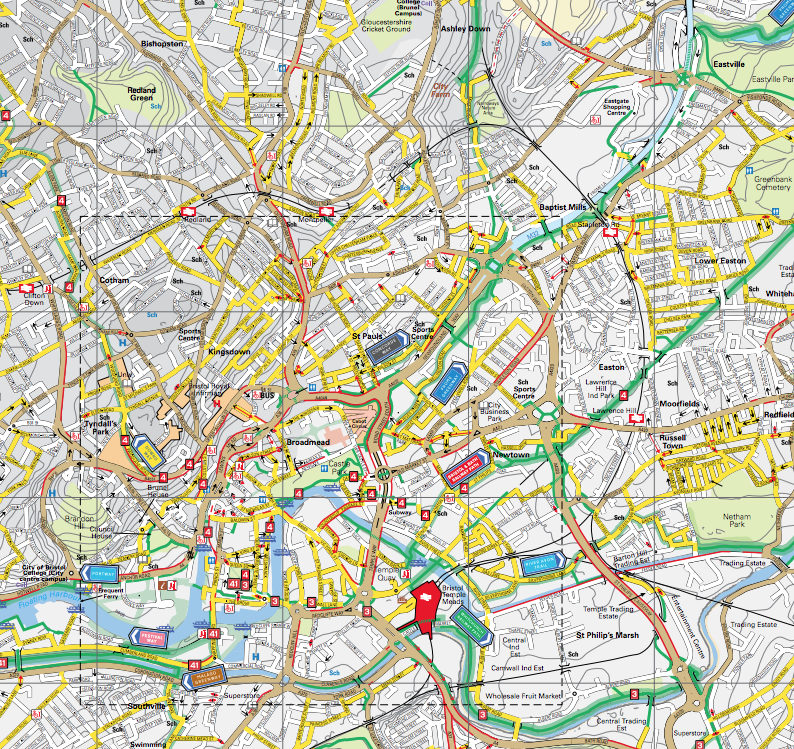 It is worth taking a moment to consider why this map is in fact quite confusing. In the first instance it is because for some people reading a map is actually pretty difficult.

Professor Amy Lobben of the University of Oregon has noted that poor map readers tend to show more activation in the frontal lobe of the brain. (The frontal lobe is associated with attention, short-term memory tasks and planning.) This means to say, if people need to think about it too much, it's likely that they would struggle to read a map well.

People find it easier to turn a map—either in their heads or in their hands—so that it matches their direction of travel ('map rotation'). In addition, the most important map reading skill is the ability to relate where you are in the real world to the corresponding spot on a map (‘self-location’).


Being able to shift one's perspective from the street-level view in front of you to the bird's eye view of a map, and being able to read a map whilst keeping north at the top of the page, are two attributes of good map readers. However, people vary in their ability to read maps. The Legible City programme overcomes this, firstly by ensuring that the map is correctly orientated, and secondly by locating the user ('You are here'). Of course, each on-street information panel has to be uniquely designed, but the idea is that if it will work for the first-time user, then it will work for everyone.

As I reported in an earlier blog, there are four stages to navigating a route:

Most people settle upon their destination / decide upon their route at the beginning of a journey (stage 2), not during it (stage 3). Therefore, when you see people reading a map whilst they are out on their bikes, it is most likely that they are checking to see whether or not they are still on track. Route confirmation markers (like Hansel and Gretel's breadcrumbs) would obviously render this practice unnecessary.

The Universal Principles of Design written by William Lidwell, Kritina Holden and Jill Butler says: "To improve route decision-making, minimise the number of navigational choices, and provide signs or prompts at decision points." Another reason Bristol's cycle network map may be quite confusing to some people is that it shows too many routes. This problem is compounded by the fact that most of these routes are not waymarked in any way, which means that without the map no one would even know they existed.

Although these maps proved to be relatively quite popular (40,000 issued in the first year), the Bristol Cycle Strategy felt that the network needed to be communicated in a clearer way. Most likely this decision was a response to the Freedom to Ride manifesto advocated by the Bristol Cycling Campaign (BCyC). 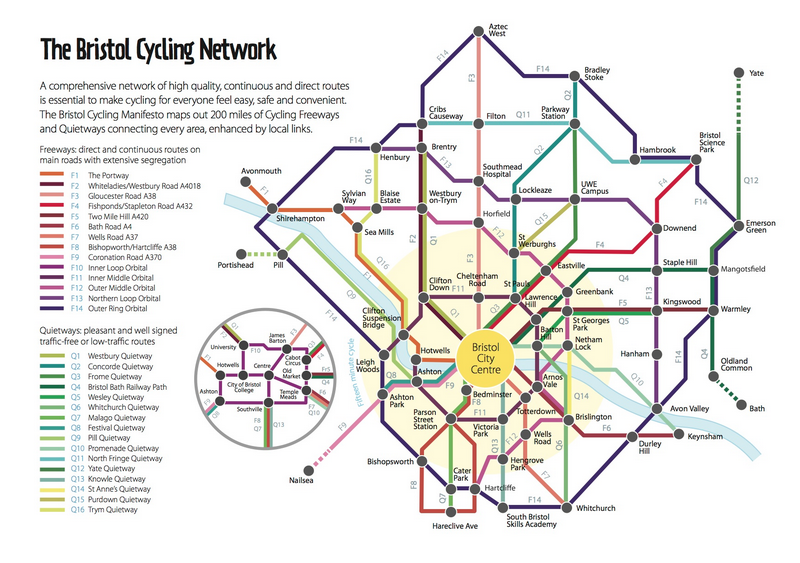 It is an established fact that colour coding makes route planning easier, and for this reason, no doubt, BCyC developed the above-shown map. However, there are all sorts of problems with this design.

The main one is that there are not enough distinctive colours to code more than about fifteen routes. This has a number of consequences, such as, the map is relatively quite difficult for colour-blind people to read; maintenance of the scheme becomes increasingly time-consuming as the colours start to fade; a significant proportion of useful cycling routes are not coded, most notably in the centre.

Just recently, as part of Bristol's Cycle City Ambition Grant, Bristol City Council (BCC) published a map showing those routes which they have identified as the most worthy of further investment. 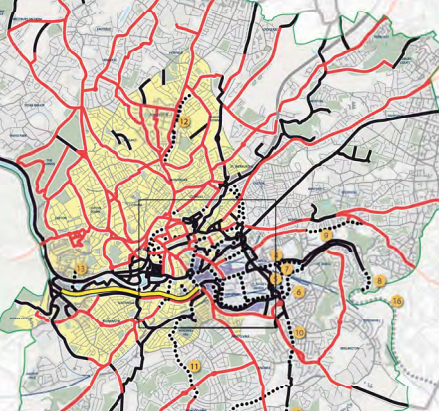 I converted the routes above into a more familiar format, and then set about trying to code as much of this network as possible.


For a strategic network aimed at utility cycling, it not necessary to code every single route which is useful to cyclists, only those which are the most useful. Please note the highest density of routes appear in that corridor which runs in both directions from the centre at about ten past eight on the clockface.


There are obviously some bits of the BCC network which do not feature in the above-shown network, but nearly 80% of it does.

Finally, the concept of a Legible City is encapsulated in the statement: Big picture, small details (source).

Big picture: "The city is a large and diverse environment of people going about their business, interacting with one another in gatherings, events or simply passing each other on the street. Not one image, symbol or logo can truly represent such a diverse collection. The city is known by its name. What can usefully be unified are certain types of information – to help people get about and find places of interest, by pointing at things or letting people know how and when to use public transport, or by providing a consistent system of visitor information that is used by all."

Small details: "We all notice the little details. We recognise when a piece of information is incorrect, we get a feeling that a piece of furniture is flimsy or robust, and we react accordingly. When making improvements intended for mass usage, accuracy and attention to detail has to be of a standard to engender a level of trust that gives confidence. Good information in the right place at the right time is used by people. Poor information is ignored and vandalised. Usage is the litmus test of the success of any system."