Once upon a time, roads might have been built speculatively, or bike lanes installed where it seemed a good idea, rather than where there was a real need. We now live in a new age of "big data", where numbers can become the foundation of more successful solutions.

And then this caught my attention from Mia Birk's presentation on riding a bike in Portland:

All of this put me in mind of something documented by Chris Mason from Bristol. He reported on a presentation given by Johan Diepens of the Dutch Cycling Embassy, in which it was noted that consultants had devised this somewhat convoluted way to direct cyclists around a junction, and were surprised that cyclists were not using it.

So, Johan said—employing what Chris felt was impeccable Dutch logic—develop routes which are meaningful and direct, and then there won't be any need for a complicated arrangement of signs (which most people will ignore in any case). 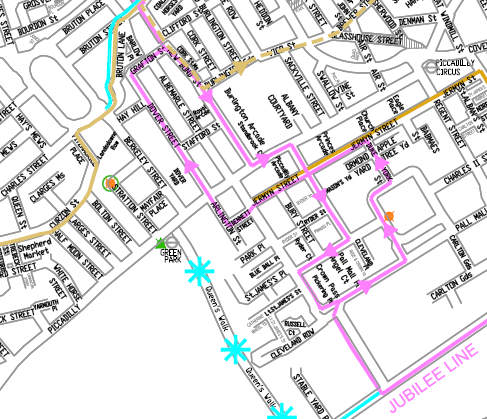 This led me to consider a comment made by Danny Williams from Cyclists in the City, who pointed out in one of his blogs that some of Westminster's cycle network must have been designed by a drunken spider. Indeed. But in this instance, is it in fact the case that the spider is being entirely irrational?
Surely the course of this route has largely been influenced by Motion 3. This means to say, because Westminster do not feel it is appropriate to install protected cycleways along the length of this route at this stage, and because the London Cycling Campaign do not accept the "prudence" of "introducing" a network to the point where it functions—yes, at a minimum level to begin with—not everywhere, of course, but here and there, certainly—then what we end up with is a higgledy-piggledy compromise.

This has to be regarded as a contravention of Motion 5, which says that:


Network elements must not be such as to involve a trade-off between safety and convenience; in other words, cyclists wanting the safest journey should not be forced to use a less convenient or slower route, or a route having lower priority, because the most convenient, fastest, or most prioritised route is engineered to a lower safety standard.

This has never been refuted, but I have learned that in the world of cycling advocacy, this doesn't make as much difference to the way people think about things as might well be the case in other areas of human endeavour. Even so, it would be astonishing to imagine that anyone could seriously believe it is not necessary to prioritise between the various network elements.

As you can see from the map above, the proposed central London bike grid (marked in black) avoids Bank junction entirely; the links between Aldgate junction and the rest of the network are incoherent and meaningless; there are some routes which are very popular with cyclists that have not been included as part of the network; and that's not everything.

Remembering Mia Birk's exhortation that we must plan and build for the bicycle in ways that are meaningful to people's lives, what meaning should we attach to a route that adds nearly half-a-mile to a crosstown journey?

It is fair to say, as the Cycle Network and Route Planning Guide points out: “Alternative routes merely supplement the main road routes, and rarely eliminate the need for cycle provision on the latter.” Even so, evidence from the Netherlands suggests that cyclists "often prefer a quiet residential street to an autonomous bicycle path alongside busy traffic arteries" (source).

Certainly I do not believe that Dutch cyclists are any different to British cyclists in this regard. Indeed, as Rachel Aldred noted during her testimony to the GLA's Investigation into Cycling, TfL advertising campaigns on cycling—which Rachel was sure had been well researched—show that what people want is to be able to cycle in pleasant conditions, away from lots of motor traffic. "And so we need to replicate those kinds of conditions where possible," she added.

Recently, Andrew Gilligan appeared on a BBC radio documentary entitled Right of Way: cycling and the city (presented by Dr Kevin Fong). Here is an excerpt:

My last blog included a series of maps which showed all of the back street routes and all of the routes through parks which feature in my proposed design (regardless of whether or not these routes are currently functional), together with all of the main road routes which are planned to be included as part of the central London bike grid. The total length of these various routes amounts to about 220 miles.

Not shown were those main road routes (i.e. the A roads) which feature in my proposed design but which do not feature in the central London bike grid. The total length of these routes amounts to about 34 miles.

Another thing to say is that I am human too: I make mistakes the same as everybody else. And because no one gives me any feedback particularly, it's left up to me to scrutinise my own work.

The map above shows routes that feature in my proposed design, but which do not feature in the proposed central London bike grid.

The red-coloured routes depict old LCN routes. Most of these routes appear now to have been discontinued, but one lingers on in the form of CSH9.

There are a couple of very important LCN routes which have not been included in my proposed design: LCN9 from Shoreditch down to Monument, and LCN11 / LCN40 from Aldgate to Holborn Circus (via Bank). More on that another time.

The orange-coloured routes from the previous map have been reproduced in the map above. Those sections which are not currently functional are shown in red.

One of the things that struck me about the radio documentary was that Andrew Gilligan and Kevin Fong (who recently presented the Channel 4 series Extreme A&E) seemed to have very slightly different ideas as to what was most important.

This is what Andrew Gilligan said: "We have to tackle two issues which restrain cycling: there is actual safety, and there is perceived safety. They're both serious problems. I would say they're equally serious."

And this is what Kevin Fong said: "The highest priority is to avoid preventable deaths."

That I not be accused of selectively quoting Mr Gilligan, he went on to say:


I think perceptions of safety are as important an issue for us as actual safety. As I say, I think actual safety is an incredibly important issue, and we absolutely don't neglect it. But I think perceived safety is also tremendously important, and the danger to my mind is that people are being unnecessarily scared away from what is actually a health- and life-giving pursuit. We know that regular cyclists have the fitness on average of someone at least ten years younger [etc, etc], so cycling is far more likely to prolong your life than it is end it, and it is far more likely to improve your health than it is harm it, and I'm concerned that this health- and life-giving activity is being damaged unnecessarily by an unsophisticated interpretation of statistics, and also by, kind of, the understandable tendency to take dramatic but exceptional incidents as representative of the whole.

I wrote in my blog, Safety: a responsibility:


Providing for the safety of cyclists is a necessary prerequisite of any policy which seeks to promote cycling as a daily mode of transport.

A large number of potential cyclists are already thinking about cycling today, but before they get back into their saddles, they want to see some movement from the public authorities: a message, perhaps, along the lines of: "It’s safe to ride a bike, and it's going to get safer—your area authority know what needs to be done, and is now taking care of it."

That was adapted from Cycling: the way ahead, and the very clear message is that if the authorities started doing something about the roads, the perceptions would take care of themselves.

This is from the Cycle Network and Route Planning Guide:


Strategic cycling plans need to address the four Es—engineering, education, enforcement and encouragement. Typically, the aim is to increase the number of cycle trips whilst reducing cyclist injuries.

Anyway, he was asked to explain why cycling is now "dramatically safer". He replied:


I think because there are more cyclists on the roads. I think drivers have become more habituated to them, and I genuinely do think there is Safety in Numbers.

The crazy thing is, as the map below shows, many of the roads that cyclists are currently using in large numbers have not been incorporated into the plan of the central London bike grid.

If Andrew Gilligan is right to warn against unnecessarily scaring people away from what is actually a health- and life-giving pursuit, and if he is right about Safety in Numbers, then why are so many strategically important main roads missing from the plan of the central London bike grid?

Thinking about the most recent of Mark Ames' Friday TED talks, I wondered how Jason Roberts would set about developing a comprehensive, city-wide cycle network ...

Then I thought that this "minimum functioning" approach would never work here, what with our culture of "elf and safety" an' all. But then I remembered that a consortium of five boroughs had sought to test this strategy back in 2003 and then again in 2006, so maybe there is no reason to give up hope just yet.

The BBC radio documentary, Cycling and the City, finished very strongly, I thought. This is how the programme's presenter brought everything to a close:


There is without doubt more to gain than there is to be lost in encouraging people to cycle. And Andrew Gilligan's right about perception. But this all boils down to quality: the quality of the debate, the quality of the data, the quality of our interventions and our ability to know that they are working. The deaths on our roads are always tragic, but the avoidable deaths are simply scandalous, and we'd do well to know the difference between the two; we'd do well to know what was working and why. All of that has to improve together if we're to realise our ambitions in giving people the confidence to cycle in our cities that they deserve.

It seems to me that if we really are to improve the quality of the debate regarding the long-term development of an amenable cycling environment, then we need to start discussing realistic ways of treating the functioning parts of the network (bearing in mind that the Dutch, for example, think about these things in twenty-year cycles).

Sheryl Sandberg (COO of Facebook) has said: "Done is better than perfect." Is she wrong?