Westminster’s Commissioner for Transportation, Martin Low, has argued that the city has to overcome some unique challenges when it comes to cycling. “It’s extremely difficult in Westminster to try and cater for the needs of all road users," he told The House, "so a balance has to be struck.”

Mr Low cites “a huge amount of kerbside activity”—in particular hotel taxis and business deliveries—as one of the main things standing in the way of widespread cycle lane provision. However, he also accepts that changes need to be made to the way in which Westminster provides for cyclists.

The council welcomes the Mayor’s proposed new east-west route, he said. It has also used its new draft cycling strategy to lay out its initial thoughts as to how it might make a contribution to the Mayor’s 300km central London bike grid.


At least on paper, the council seems to making a good deal of effort to comply with the Mayor’s Vision for Cycling. If that plan were fully implemented, says Mike Cavenett of the London Cycling Campaign, the capital would be a significantly better place to cycle.

"We recognise it’s going to take time," Mike acknowledged. "But that vision, from a policy point of view, is a very strong document.”

Julian Huppert MP shows a similar cautious optimism: “I think the Mayor’s Vision is very good. We need to make sure it’s delivered and actually becomes reality. There’s more to do, and there will always be more to do, but it’s good to see that there is some real drive.”

Ultimately, only the coming months and years will tell whether planned improvements make the jump from blueprints to concrete. Until that happens, Westminster’s cyclists would do well to follow Boris Johnson’s advice on riding around some of the capital’s nastier roads: “Keep your wits about you”.

First off, I very much welcome the way that Westminster is approaching this. I like what Martin Low is saying as well. Secondly, the proposed bike grid is not nearly as weak as I had initially supposed. Danny Williams' blog has identified pretty much all of the rickety bits, but I don't think it would take a lot for these to get sorted out. Thirdly, it looks like a denser network could quite easily be "introduced". I say this because with the currently-proposed programme of works, it would appear that there are already plans in place to deal with most of the difficult non-functioning bits.


Danny says: "The strategy is to deliver what Westminster calls a network of 'well-signposted, direct and continuous cycle routes' through central London."

Now we can measure whether a route is direct or not by considering the alternatives. If a route is not direct, then, as Michael Robinson pointed out on Danny's blog, it "will need to be really good, or else people will just ignore it". 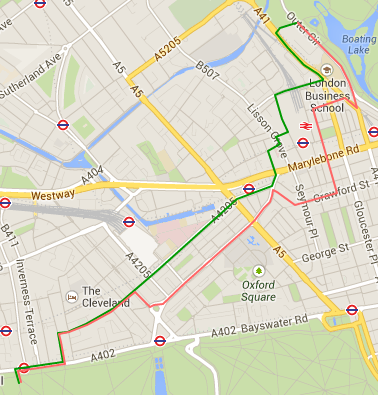 The map on the left shows in red the route proposed by Westminster, and in green an alternative route.

Actually, the officially-proposed route is a combination of a couple of routes, but no matter.

The problem with the green-coloured route is the one-way section on Praed Street / Chapel Street.


Two views of Praed Street, looking north-east and back the other way (Google StreetView)

Does London want to have two-way cycling on streets like Praed Street? That cyclist in the photo on the right evidently thinks it already does!

On streets like Praed Street, the issue is not so much safety, but access. I would emphasise that it makes precisely no difference to me personally whether a route goes this way or that way. Truly, no difference at all. But this said, when planning the network there are certain criteria which it is very important to hold on to. Most important of all, I would suggest, is encapsulated in this quote from LTN 2/08:


Networks should serve all the main destinations, and new facilities should offer an advantage in terms of directness and / or reduced delay compared with existing provision.

The thing about it is, actually, the authorities could easily facilitate two-way cycling on streets like Praed Street, and here's how. Firstly make the speed limit 20mph, and secondly sort out the junctions at either end.

All right, all right, sorting out the junctions might be relatively quite a difficult thing to do, but the point I am working towards is that this task doesn't need to be nearly as difficult as the 'segregati' would make it. Westminster have taken some big steps in the right direction, and I think it is incumbent upon everybody who is interested in making London a more "cyclised" city to go and meet them, wherever it is that they actually are now.

Surely this would be a far more productive thing to do, than to remain sitting at the top of some sacred mountain or other.

As the ever-informative Jan Gehl said about the City of Copenhagen: "They never put out a big master plan: let's make a lot of pedestrian space, let's make a lot of bicycle lanes, let's take a lot of parking out of the city, let's narrow all the traffic streets. Never. Because if you did that in one plan, you will lose the election right now, because nobody would believe it would work. What they've done in this city is that they've taken a little step every year for forty years; and there is a fantastic difference between what it was then and what it is now."

In the case of the routes shown on the map to the left, both have been proposed by Westminster.

In terms of distance, there's nothing much between them: the red-coloured route is only about 65 metres further.

Danny Williams says of this route: "the big and positive thing about this is that you will—by the looks of it—be able to bike north up [New] Bond Street, and that is a big deal indeed."
As the photo below left shows, if the route along New Bond Street is to be made two-way for cyclists, this would likely require the removal of at least one lane of motor-traffic. Whereas, as the photo below right shows, if the route along Harley Street is to be made two-way for cyclists, almost nothing would need to be done in terms of engineering (except probably at the junctions). For the record, I could code one or both routes using compass colours (e.g. here). 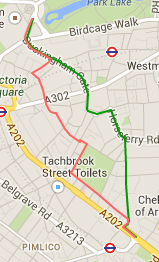 The red-coloured route is only 0.05 mile further than the green-coloured route, but as things currently stand, it's a good deal more fiddly. 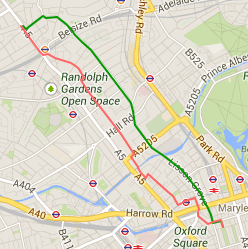 Hannah Cagney says on the Cyclists in the City blog that there seems to have been little thought given to linking the grid to possible routes in other boroughs. In Hannah's view, the grid "poorly coordinates with river crossings, particularly at Chelsea Bridge, Lambeth Bridge, and Waterloo Bridge." I agree. I might also add that the so-called Central line route appears to end as abruptly as it starts.

I am going to take a look at the missing bits of an extended network in my next blog.