I would like to start with a few statements which, I think, most right-minded people would agree with:


Pedestrians and cyclists will use high­ quality, well­-maintained, traffic-­free routes away from the carriageway if they are more direct than the equivalent on-­road alternative and there are no personal security issues.

The needs of people with various types and degrees of disability should be taken into account through consultation and design.

Hearing­- and sight­-impaired pedestrians have problems sensing the presence of cyclists.

Pedestrians and cyclists benefit from even, well-­maintained and regularly swept surfaces with gentle gradients.

Safe access for pedestrians and cyclists should be provided during road works.

Surface defects should not be allowed to develop to the extent that they become a hazard, and vegetation should be regularly cut back to preserve available width and sight lines.

Routes should be unimpeded by street furniture, pavement parking and other obstructions.

An area cycle route network may be achieved through a combination of measures to manage the impact of motorised traffic as well as cycle­-specific infrastructure.

New­-build situations provide good opportunities for creating attractive, high ­quality infrastructure for cyclists, either in the form of quieter roads or direct cycle routes away from motor traffic.


Measures that reduce the volume and / or the speed of motor traffic benefit other road users by making the roads safer and more pleasant.


Reducing traffic speeds may enable the junction geometry to be tightened.


Reducing the volume of traffic may release carriageway space.


Planning and designing high ­quality infrastructure involves developing individual, site­-specific solutions, but there are some common requirements that need to be satisfied. The underpinning principle is that measures for pedestrians and cyclists should offer positive provision that reduces delay or diversion and improves safety.

For most utility cyclists, convenience—in terms of journey time and distance—and an acceptable degree of traffic safety and personal security are most important.


The preferred way of providing for cyclists is to create conditions on the carriageway. 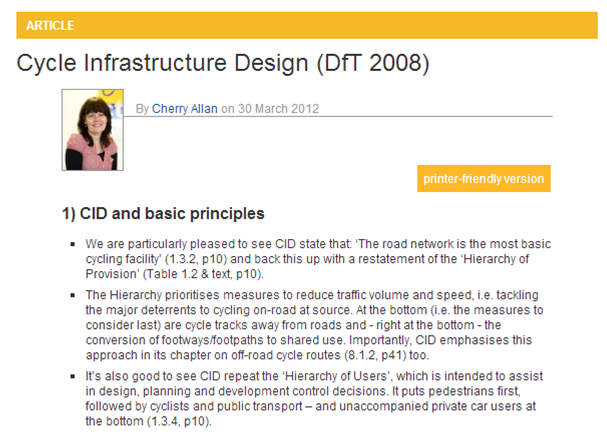 The road network is the most basic (and important) cycling facility available.

Where the speed and volume of traffic is high, it may be appropriate to consider an off­-carriageway option for cyclists.

Bearing in mind that the:


Conversion of existing footways to permit cycle use should only be considered when on­-carriageway options have been rejected as unworkable.

Because the case is:


Creating space for cyclists by taking existing footway space from pedestrians is generally the least acceptable course of action.

Indeed, it is a very high priority that:


The potential for conflict between pedestrians and cyclists should be minimised.

Now, it is stated that:


There is seldom the opportunity to provide an off-­carriageway route within the highway boundary that does not compromise pedestrian facilities or create potential hazards for cyclists, particularly at side roads.

But then again, it is also stated that:


Opportunities for redistributing space within the highway should be explored, including moving kerb lines and street furniture.

[Note: "A highway consists of the carriageway, the footway and the verge, but it can also incorporate a footpath, bridleway or cycleway."]

So who knows what to make of that? (Probably this is more like it: "There is seldom the opportunity to provide an off-carriageway route within the highway boundary on the cheap etc, etc, ...")


In vehicle-restricted areas, where the whole street width is available, cyclists can usually mix safely with pedestrians, especially outside the main retail trading hours.


Routes should be provided into and through areas normally inaccessible to motor vehicles, such as parks and vehicle-restricted areas.

The journey purpose is important in defining the value attached to attractiveness. There are situations where walking or cycling for pleasure may be the only reason for the journey. These include rural leisure routes, parks, urban squares and tourist destinations. There are also multi-­function environments, such as shopping arcades, market places and public transport interchanges, where people may wish to meet, relax or trade, but which also serve as through-­routes for pedestrians and cyclists.


Thus far, it has been established that pavements are for pedestrians and roads are for cyclists. This is not simply a statement of the way things are, by the way, but rather, it is actually considered that this is the way things ought to remain (that is, cycling should not be treated as a means of transport in its own right).

There is a very clear suggestion that cycling should be allowed in those places which are normally inaccessible to motor vehicles (e.g. parks and—outside the main retail trading hours—high streets). Moreover, new-build situations present a golden opportunity to develop good cycling and walking routes. But where is all of this taking us? What is the destination? What is the shared vision?

There are five core principles which summarise the desirable design requirements for cyclists.

The first one is:


Networks should serve all the main destinations, and new facilities should offer an advantage in terms of directness and / or reduced delay compared with existing provision.


Routes and key destinations should be properly signed, and street names should be clearly visible. Route maps should be made available, and on-­street maps can be helpful.

Trip ­end facilities should be clearly marked, conveniently located and appropriate for the likely length of stay.

The second one is:


The routes should be continuous and coherent.

The third one is:


Not only must infrastructure be safe, but it should be perceived to be safe.


Traffic volumes and speeds should be reduced where possible to create safer conditions for cycling and walking. Reducing traffic can sometimes enable the introduction of measures for pedestrians and cyclists that might not otherwise be viable.

The fourth one is:


Infrastructure should meet design standards for width, gradient and surface quality, and cater for all types of user, including children and disabled people.


Dropped kerbs are particularly beneficial to users of wheelchairs, pushchairs and cycles, and tactile paving needs to be provided to assist visually-impaired people. Dropped kerbs should ideally be flush with the road surface. Even a very small step can be uncomfortable and irritating for users, especially if there are several to be negotiated along a route.

The last one is:


Public spaces need to be well-­designed, finished in attractive materials and be such that people want to stay.


The surfaces, landscaping and street furniture should be well-maintained and in keeping with the surrounding area.


It is not exactly clear to me what the difference is between 'Convenience' ("Networks should serve all the main destinations") and 'Accessibility' ("Cycling networks should link trip origins and key destinations"). But that aside, it is not a bad list, and I was naturally curious to see how it tallied up with what I had written. 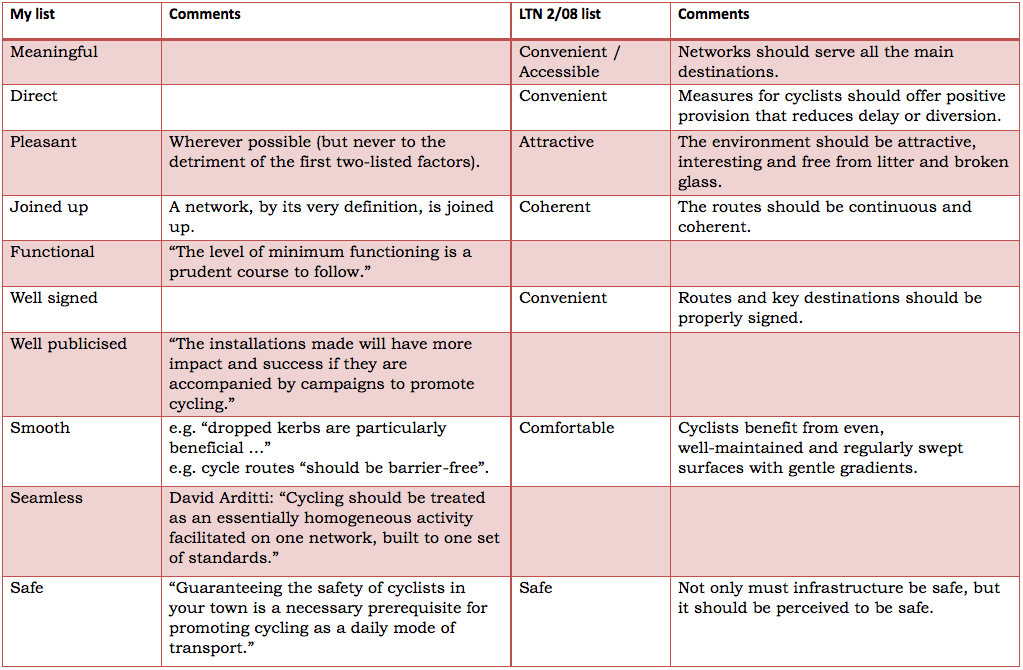 There are a couple of things which are substantially different between the two lists.

The first is that, with the LTN 2/08 list, there is no reference to the view that getting the network up and running would be a smart thing to do. If the prudence of doing this to a minimum level of functioning was accepted, it would be possible to achieve quite a lot, relatively quickly and relatively cheaply. But it won't happen this way, I am sure of it. As George Orwell noted, we are not a particularly practical people. Indeed, says he, one has only to look at our methods of town planning to see how little we care about "mere efficiency".

The second is that, to quote David Arditti: "We know from looking at the systems of cycling infrastructure in the most successful cycling nations [...] that they design one network for cyclists, and only one, to one set of standards. They treat cycling as we treat motoring and walking, that is, as an essentially homogeneous activity facilitated on one network, built to one set of standards, for all those who do it. They recognise that cyclists, whether they be young or old, fast or slow, able-bodied or disabled, all need essentially the same things, in terms of a quality network that gives priority, directness, and both actual and subjective safety."


These principles are useful when designing for the differing priorities assigned to various aspects of a route (for example, perceived safety versus directness) for users with different requirements resulting from their journey purpose, level of experience or ability. The design of the most appropriate infrastructure needs to take account of the type(s) of cyclist expected to use it.


Some cyclists are more able and willing to mix with motor traffic than others. In order to accommodate the sometimes conflicting needs of various user types and functions, it may be necessary to combine measures or to create dual networks offering different levels of provision, with one network offering greater segregation from motor traffic at the expense of directness and/or priority. Such dual networks may be considered analogous to a busy main road carrying through­-traffic and a service road catering for access to homes and shops at lower speeds.

In his assessment of LTN 2/08, Joe Dunckley wrote: "I would have hoped that “dual networks” could have been the one thing that might be able to unite cyclists in opposition."


But no! Consider what Chris had to say in a recent comment posted on aseasyasriding's blog:

"This is exactly why I fear the introduction of segregated bike lanes [...]. They might be ideal for other places, but for CS7 I fear the infrastructure would be overloaded to the point of breakdown from day one, which would then have exactly the opposite of the desired effect and force me and others riding longer distance commutes onto more dangerous routes if we want to keep commuting within a reasonable amount of time.

"I can justify 75 minutes each way, as this is only 10 minutes or so slower than the train, but what if it starts creeping up to 90, 100 or more? Then I’d have to be back on the train on days where I have to take the kids to Cubs and the like. I don’t mind thinking of others as well, as has been suggested above, but if doing so prevents me from riding my own bike, then I’m afraid I’m going to be as selfish as possible!"

Before closing, a few more of what LTN 2/08 describes as "underlying principles":


The ability for people to window shop, walk or cycle two abreast, converse or stop to rest or look at a view makes for a more pleasant experience.

Issues of light pollution should be considered, in addition to personal security in rural and semi­-rural routes.

There should be provision for crossing busy roads and other barriers, and in some areas there should be a positive advantage over private motor traffic.

Delays for cyclists at signalled crossings should be minimised.

The risk of crime can be reduced through the removal of hiding places along the route, provision of lighting and the presence of passive surveillance from neighbouring premises or other users.

Cycle parking should be sited where people using the facilities can feel safe.

The needs of pedestrians, cyclists and equestrians should be considered where their routes cross busy roads, especially in rural areas.